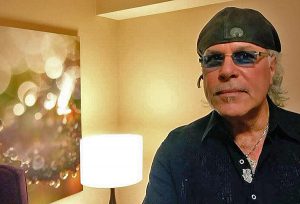 David Hirsch was born in the Bronx in New York city and then grew up very hard in New England. Without a Mom or Dad – he was raised by his Grandmother, whom he loved with all his heart. It was David’s Grandmother who instilled in him his love for music. He remembers her playing an old upright piano that was in the nursing home chapel where she worked. He loved to sit and listen to her play and sing. Upon her sudden and tragic death, at age 12 – David then moved around from relative to relative, home to home, finally becoming a runaway.

David’s life got caught up heavy in street life and drugs. He shares that when his grandmother died, love died with her, and he spent years in loneliness, emptiness, anger and addiction.

During the ‘Jesus movement’ in the 70’s, David was invited to see a Larry Norman concert in Boston. Larry was one of the premier Christian music pioneers and his friends told him he would love the concert. While standing outside the venue, debating whether he would go in or not, a Boston taxicab pulled up, and out stepped this long blonde haired individual, carrying a guitar case. As he walked past David he looked at him and said, “Well are you gonna’ just stand there, or are you coming in?” David remembers and comments on his eyes saying, “It looked as if there were flames of bright fire sparkling in his eyes.” Without waiting for a response, the individual holding the guitar walked into the concert hall.

David felt as if a magnet was now drawing him into that venue. He went in and was given a balcony seat located right above the stage. When they introduced Larry Norman, David realized it was the individual who stepped out of the taxi moments earlier.

David gave his life to Jesus Christ at that concert, and that evening marked the beginning of the many miracles that he would experience in his life. Until this day, during his calls for salvation, David many times uses, the same line Larry Norman said to him all those years ago, “Well are you gonna just stand there, or are you coming in?”

From there David played drums and guitar in different Christian bands around the New England area. He then began to write songs, performing solo concerts with his guitar from coffee houses to community parks. He remembers listening to Larry Norman, Phil Keaggy, Paul Clark, Petra, The 2nd Chapter of Acts, and anyone else he could find that was singing about Jesus through their music.

Without a true church family, meaningful fellowship, and accountability, David eventually began to fall away and ended up back in serious drug addiction, even sleeping in the prayer rooms of one of the coffee houses where he used to perform. A very close friend told him about a Christian program in Virginia that could help. Knowing he was out of options, he agreed and his friend bought him a ‘one-way’ train ticket to Richmond, Virginia.

The program was called ‘New Life for Youth’ – founded by Pastor Victor Torres, author of many books including “Son of Evil Street’ and, the subject of the Hollywood movie production entitled ‘Victor’. David describes being at New Life for Youth, as a very important time frame in his life. While in the program, David met his wife Wanda whom he describes as his second miracle. Today 42 years later, along with their son Pastor Adam, their daughter Sarah, along with their families and children all serve in the ministry full time.

In 1979, after the New Life program, David and Wanda went on to become very successful in the designer fragrance industry, opening several locations, covering 4 states. 8 years later, with the business growing mightily, and at the very height of their success, it was then that God called David and Wanda into full-time Ministry.

Amazingly enough, David went back and became the Director of New Life for Youth. During these years he had the wonderful privilege of leading, training, and graduating hundreds of young men coming from backgrounds of drug addiction, alcoholism, gangs, prisons, just to name a few who have gone on to become whole men of God in their homes, churches, and communities. Many of these men have become leaders, Administrators, Ministers, Pastors and Directors of Ministry today. God also used David’s gifting in music to raise up a drama set to live music, where the doors opened up for their presentation to be performed in multiple public schools, ministering to tens of thousands of students. Wanda was instrumental in pioneering the very first Women’s home for New Life for Youth.

In the 90’s, David was invited to be a guest speaker at a conference in Richmond, VA. During this speaking engagement, David received in his heart the vision for all that God is doing right up through today.

With this vision and faith, David, Wanda, and their family moved from the New Life ranch to a rented house in Spotsylvania County Virginia. It was in this home that God began to bring greater clarity to the vision that God birthed in his heart, and the ministry of New Life Outreach International and Full Armor Music Ministries was planted in Fredericksburg, Virginia.

David is also the founder of GodsLoveNeverFails.com, ‘Neighborfest’ and the video message ministry entitled ‘A Word from the Lost Highway’. He has also founded ‘Full Armor Music Ministries, which features the outreach bands ‘FULL ARMOR’ and ‘THE KEY OF DAVID’.

Another miracle in David’s life is that many of the Christian music pioneers he would love to listen to, are now close friends. They worked together with him on his latest CD entitled ‘A Different Dream’, from his band ‘THE KEY OF DAVID’. This project features the legendary Phil Keaggy, Matthew Ward, Paul Clark, and a very special song David wrote called, ‘The Remedy’, which has been recorded on the late Keith Green’s grand piano, (Another Miracle)! The CD was released in December 2016.

Today David can be heard on B101.5 FM reaching over 1,000,000 people through his daily radio ministry, along with his YouTube and daily blog messages reaching multiple thousands in America and around the world through GodsLoveNeverFails.com and social media websites.

Without doubt, it is absolutely and undeniably true – ‘GOD’S LOVE NEVER FAILS’